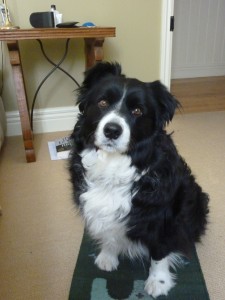 While doing some background research on Dr Raymond Moody, the father of Near Death Experiences I came across a project which he has going. For those of you who, like me, have a  pet (that’s our Truffles on the left – very much alive) or those who have lost a pet I thought you might be interested in this. This is taken from Raymond’s website:

Have you or a loved one suffered grief or had problems with the loss of a pet? Dr. Moody is working to produce a new DVD, and possibly book, for those interested in and suffering from the loss of a pet. Many people have told stories and sought advice and solace from Dr. Moody at most of his lectures. Often he has considered dealing with this subject but felt he had no first hand experience in the loss of a pet, only counseling and listening. Included in this video will be a look at how pet loss differs from human loss, stories of pet transitions, empathetic death experiences between care giver and pet, preparing for the inevitable event and advice and counsel on coping and sharing the loss of a pet. If you have a story or have had an experience with your pet and would be willing to share it please contact David Hinshaw, the producer, either by email david@lifeafterlife.com To keep up with the latest paranormal news sign up below. Continue the Conversation Below If you would prefer to share your own experience of the death of a pet on this forum then please leave a note below.