The I Ching – Paranormal, Psychic or Not? 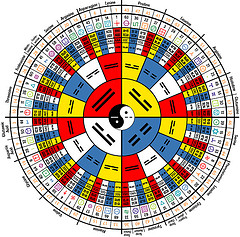 From Valentine: I have signed up to receive Psychic Revolution and I ask whether interpretation of the I Ching is included in your brief. I am not certain this is a psychic talent, but I should like to have your opinion on the matter. Many thanks.

I received this query from Valentine and it got me thinking. Certainly this is not covered in the paranormal survey we have open at the moment but maybe it depends on the definition we use.

For those who are not familiar with the I Ching, here is a Guest Post from Valentine (our first Guest Post!)

The I Ching or Book of Changes*

The I Ching is a system of divination based on a Chinese text written some 2500 years ago. Of unknown origin, it was held in high regard by Confucius and continues up to the present to command great interest and respect throughout the Far East. While sharing characteristics of the Tarot in the way it operates, instead of picture cards The I Ching is composed of 8 trigrams. These are stacks of 3 horizontal straight lines, either broken or unbroken, paired together to form 64 possible combinations known as hexagrams which form stacks of 6 lines each.

Each trigram represents a range of symbolism such as Heaven, the Creative, the Father or Earth, the Mother, the Receptive, and when paired, the resulting hexagram acquires a further designation such as, for example, Youthful Folly, Peace, Breaking Through, each line providing a comment upon the question which has been asked.

The hexagram itself is arrived at by one of several methods, nowadays commonly by throwing 3 coins so that they land heads or tails. The obverse of each coin represents the number 3 and the reverse, 2; therefore, the throw of all three coins results in a combination of the numbers 6 (broken line), 7 (unbroken line), or possibly 8 (changing broken line) or 9 (changing unbroken line). Only the changing lines are relevant to the interpretation, and their change, from broken to unbroken or the reverse, results in a second hexagram in which the changed line in its new form is again relevant.

Like Tarot readings, the operation of the I Ching, according to Carl Jung, may be explained by synchronicity, or the coming together of all relevant elements, both material and psychic. It cannot be thought of as a linear process of cause and effect. As an oracle, the interpretation confines itself to a short time span, usually not more than the immediate 24 hours. However, the text may also be used as a source of wisdom, and as such, this abbreviated time span need not be taken into consideration.

What do you think?

Can the I Ching be classified as paranormal? Have you had direct experience of the I Ching?

Previous: How Normal is the Paranormal?

Next: Paranormal Research Survey by Psychic Revolution – Open to All