The following is 1 of 2 parts of Jennie’s story. Jenny Ashwell is a Spiritual Medium and Psychic Artist based in the UK. This is the first of two parts of her psychic development story. 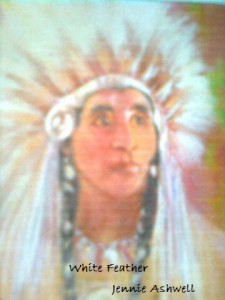 I have been Clairvoyant (clear seeing) and Clairaudient (clear hearing) from the age of five.

I was the last to be born in my family, and had two older sisters who were seven years older than myself. As a child with this gift I had a lonely up bringing. I always felt different and at school was made to feel there was something different about me.

I would stand in the playground as if I was in some sort of altered state. I saw a different scene to the one the other children were in.

At this time I had no idea what was happening but did not feel afraid. Somehow, it seemed familiar to me.

Little did I know, however, I had other family members with this gift, and I only found this out later in life. It is on both sides of my family: my Mum, my Father’s cousin, and my Mother’s uncle spring to mind.

I had my first experience at three. I was in a cot with wooden bars and the room I was in lit up with golden light and there stood three beings. I have never forgotten that moment.

I also remember past lives but only have a few memories of them.

I carried on having experiences every now and then – always knowing that something was about to take place.

I was aware of the existence of a young girl who would talk in my right ear. She used to have me do something that would get me in trouble and, needless to say, I was glad when she went on her way.

At age six, we moved into a new home and while we left London behind I always felt it was my home.

As I grew older (around the age of eight) more spirit activity increased. At night, in my bedroom I could see spirit people and I began to feel afraid. When I was nine years old I began seeing a nun over by my window. The nun wore a dark navy habit and I had to wait until I was much older before I learned her name. I was always amazed how I could see her in colour.

Also, it was around this time that a monk first appeared – at the top of the stairs. He was rounded and wore a very rough looking outfit which I don’t think was comfortable, open sandals and a cross hung from his waist on what looked like rope.

By this age I was seeing in the light, not just the dark but if I blinked, the monk would be gone. When I was 43 years old, a Medium told me who  he really was – until then, only my mother and I knew of his existence.

I was always taught to say my prayers and was made to attend C of England church but I never, ever felt comfortable with this. Somehow, I found my own way with faith.

Around the age of 16, I started getting some very bad headaches. To this day, I still get them when spirit comes in.

From around the age of nineteen things really began to snowball. I started feeling very light headed and I remember asking my Dad to build me an easel. He was good at woodwork and he agreed.

I loved drawing and spent most of my time doing just that. However, one day I found myself becoming light headed again and somehow I became a teacher. I could see my students sitting in front of me, my easel was now a blackboard, and my bedroom a school.

So, my life went on and before I knew it, it was time for me to leave home.

I met and married my first husband. We were lucky to get a flat which came with his job but this was also the time when even more activity began.

With this flat came knocks on the door late in the night. I heard a man’s voice come out of the wall, a booming voice so loud I thought my husband would wake up, but he never did. Night after night I saw visions of children in Victorian clothes down below my bedroom window. I was wide awake and would blink and the vision would dissipate. I was often left with my heart beating nine to the dozen.

We moved again, back into an old house. Late at night the TV would suddenly come on, things would be moved, and my visions were now moving pictures in my mind, sometimes in colour, other times in black and white. It was like watching an early, old fashioned movie when everyone walked too fast. Everyone was dressed in Victorian clothes, once again.

One thing lead to another. By this time I was more at ease with my gifts and they developed at great speed.

Jennie, like many others encountered the paranormal from an early age. Please leave you feedback below or click on the link to read more about Jennie’s psychic development.

Previous: A Ghost in DisneyLand