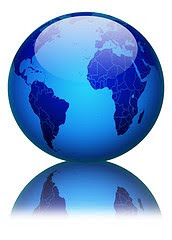 Paranormal Phenomena
As my thesis confirmed, experiencing the paranormal seems to be a universal possibility. This is not limited to any country in particular, and I suspect it crosses every divide – race, age, gender, language – but with variations (more on this later). While the online survey was written in English and it did attract the largest number of respondents from the expected countries, it was the responses from the residents of the unforeseen countries that really caught my attention.
First, to the major contributing nations. Overwhelmingly, it was the Americans who checked in and contributed the most (62%), followed by the Australians (15%), British (8%), and Canadians (7%). One notable, and indeed unfortunate omission from the survey was the Chinese. Their absence was presumably due to the Government’s tight controls on the Internet, rather than a language barrier or a lack of spontaneous paranormal experiences to report.
The small remaining balance of responses came from residents of 55 other countries. And what a list that is!
The second largest group of contributors were from South Africa, Ireland, Germany, New Zealand, and India with smaller numbers emanating from Austria, Belgium, Brazil, Denmark, Finland, France, Greece, Hungary, Italy, Malaysia, Mexico, Netherlands, Norway, Philippines, Russia, Singapore, Sweden, Switzerland, and Zambia.
There were also contributions from Croatia and Cyprus, Hong Kong and Hungary, Macedonia and Malta, Nepal and Nigeria, and Tanzania and Turkey. Antarctica was the only continent not represented (anyone know someone based down there? Let them know that the Paranormal Survey is now live once more.)
I must admit that it was surreal to see my Explanatory Statement translated into other languages including Russian and Finnish. Such a buzz!
Summary: the data supports the notion that spontaneous paranormal experiences are widely encountered.
Question: Do you agree? Put you experiences on record here.