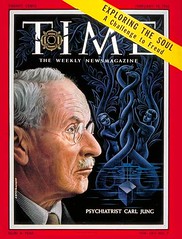 It seemed to me that I was high up in space.  Far below I saw the globe of the earth, bathed in a gloriously blue light. I saw the deep blue sea and the continents. Far below my feet lay Ceylon, and in the distance ahead of me the subcontinent of India.  My field of vision did not include the whole earth, but its global shape was plainly distinguishable and its outlines shone with a silvery gleam through that wonderful blue light. In many places the globe seemed colored, or spotted dark green like oxidized silver. Far away to the left lay a broad expanse – the reddish-yellow desert of Arabia; it was as though the silver of the earth had there assumed a reddish-gold hue. Then came the Red Sea, and far, far back – as if in the upper left of a map – I could just make out a bit of the Mediterranean. My gaze was directed chiefly toward that. Everything else appeared indistinct. I could also see the snow-covered Himalayas, but in that direction it was foggy or cloudy. I did not look to the right at all. I knew that I was on the point of departing from the earth.

I had seen similar stones on the coast of the Gulf of Bengal. They were blocks of tawny granite, and some of them had been hollowed out into temples. My stone was one such gigantic dark block.  An entrance led into a small antechamber. To the right of the entrance, a black Hindu sat silently in lotus posture upon a stone bench. He wore a white gown, and I knew that he expected me.  Two steps led up to this antechamber, and inside, on the left, was the gate to the temple.

As I approached the steps leading up to the entrance into the rock, a strange thing happened:  I had the feeling that everything was being sloughed away; everything I aimed at or wished for or thought, the whole phantasmagoria of earthly existence, fell away or was stripped from me – an extremely painful process. Nevertheless something remained; it was as if I now carried along with me everything I had ever experience or done, everything that had happened around me. I might also say: it was with me, and I was it. I consisted of all that, so to speak. I consisted of my own history and I felt with great certainty: this is what I am. I am this bundle of what has been and what has been accomplished.

This experience gave me a feeling of extreme poverty, but at the same time of great fullness.  There was no longer anything I wanted or desired. I existed in an objective form; I was what I had been and lived. At first the sense of annihilation predominated, of having been stripped or pillaged; but suddenly that became of no consequence.

Something else engaged my attention: as I approached the temple I had the certainty that I was about to enter an illuminated room and would meet there all those people to whom I belong in reality.  There I would at last understand – this too was a certainty – what historical nexus I or my life fitted into.  I would know what had been before me, why I had come into being, and where my life was flowing. My life as I lived it had often seemed to me like a story that has no beginning and end. I had the feeling that I was a historical fragment, an excerpt for which the preceding and succeeding text was missing.

The doctor had been delegated by the earth to deliver a message to me, to tell me that there was a protest against my going away. I had no right to leave the earth and must return. The moment I heard that, the vision ceased. I was profoundly disappointed, for now it all seemed to have been for nothing. The painful process of defoliation had been in vain, and I was not to be allowed to enter the temple, to join the people in whose company I belonged. In reality, a good three weeks were still to pass before I could truly make up my mind to live again.  I could not eat because all food repelled me.

The view of city and mountains from my sickbed seemed to me like a painted curtain with black holes in it, or a tattered sheet of newspaper full of photographs that meant nothing. Disappointed, I thought, ‘Now I must return to the ‘box system’ again.’ For it seemed to me as if behind the horizon of the cosmos a three-dimensional world had been artificially built up, in which each person sat by himself in a little box. And now I should have to convince myself all over again that this was important!  Life and the whole world struck me as a prison, and it bothered me beyond measure that I should again be finding all that quite in order. I had be en so glad to shed it all, and now it had come about that I  –  along with everyone else  –  would again be hung up in a box by a thread.

I felt violent resistance to my doctor because he had brought me back to life. At the same time, I was worried about him. ‘His life is in danger, for heaven’s sake!  He has appeared to me in his primal form!  When anybody attains this form it means he is going to die, for already he belongs to the ‘greater company.’ Suddenly the terrifying thought came to me that the doctor would have to die in my stead.

I tried my best to talk to him about it, but he did not understand me. Then I became angry with him. In actual fact I was his last patient. On April 4, 1944  –  I still remember the exact date I was allowed to sit up on the edge of my bed for the first time since the beginning of my illness, and on this same day the doctor took to his bed and did not leave it again. I heard that he was having intermittent attacks of fever. Soon afterward he died of septicemia. He was a good doctor; there was  something of the genius about him. Otherwise he would not have appeared to me as an avatar of the temporal embodiment of the primal form.

Next: A Few More Books to Consider